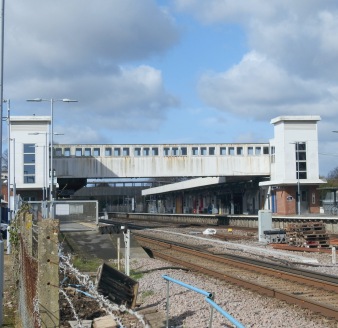 Havant station opened in March 1847 when a railway line to Havant from Chichester was built by the London, Brighton & South Coast Railway. It featured a
level crossing at either end. The western end crossing was replaced by the separate road and footbridges we see today. On opening, there was no direct route to London so passengers had to travel down to Brighton and back up again! This changed when a new single track railway line, the Portsmouth Direct Railway, was built south from Farncombe as a speculative private venture. Eventually, it was adopted by the London & South Western Railway who opened the line in August 1859. It was made double track in 1878. There was great rivalry between the two railway companies at the time, as the L&SWR wanted to access Portsmouth using some of the track owned by the LB&SCR. An agreement for co-operation eventually resulted in harmony.

Havant station was the start of the Hayling Island branch line which opened in 1867 and closed in 1963. Much of the route now forms the Hayling Billy Coastal
Path walking trail.

The station has undergone extensive re-builds; the first in 1889, and the second in 1938 as part of the 1937 electrification of the line to London via Petersfield. The signal box near the eastern level crossing was rebuilt and extended at this time. The late 1930s style is still evident, particularly in the station overbridge and at the main entrance, where the fixings for the old ‘Southern Railway’ sign can still be seen. The former goods yard sidings were all removed in 1977.

The station is now managed by South Western Railway

Planning your train journey to anywhere in the UK

Departing in the next 2 hours.

Regular buses going to and from the train station.

The little church in a field

One of the South Coast's start historic properties