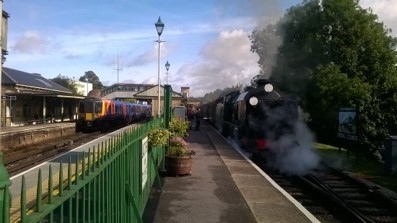 Alton station first opened in 1852, sited where the car park is today. It was replaced by the present building in 1865.

The station serves two railway lines: the Alton Line which runs to Brookwood and on to London, and the Mid-Hants Watercress Line, which runs to Alresford.  The Watercress Line once ran through to Winchester but was closed to passengers in February 1973, reopening as a heritage line in 1985.

Two other routes, both now closed, also served the station – the Meon Valley line to Fareham, and the Basingstoke and Alton Light Railway.  More information on the history of the station and local lines can be found here.

Alton is a gateway town to the South Downs National Park, and is perhaps best known for its links to Jane Austen. Whilst living at nearby Chawton Jane wrote, revised and published all her novels:  Sense and Sensibility, Pride and Prejudice, Mansfield Park, Emma, Northanger Abbey and Persuasion.

There is a signposted walk from the station to the pretty village where she lived.

Another remarkable local resident was the pioneering naturalist and ecologist, Gilbert White, author of the world famous Natural History and Antiquities of Selborne, published in 1789. His house, garden and the beautiful National Trust common so loved by Gilbert is a few miles from the station.

Alton is also well known for its love of walking and is a member of the Walkers are Welcome network of towns. Popular walks include the Wey Walk, from the station to the river’s source, regular guided walks around the historic market town, the St Swithun’s Way passes through the town and the Hangers Way starts from the station.

Planning your train journey to anywhere in the UK

Departing in the next 2 hours.

Regular buses going to and from the train station.

Visit Alton website with useful information on the town

The railway line between Alton and Winchester

The ‘Great House’ referred to in Jane Austen’s letters

House and gardens in Selborne

Walking for Health and Alton Ramblers, and from Alton Town

Informal network of individuals who wish to facilitate cycling

site of the Battle of Alton during the English Civil War

English girl who was murdered by solicitor's clerk

The town and immediate surrounding villages has a wonderful variety of friendly cafes and pubs including the award winning local brewery Triple fff beers.